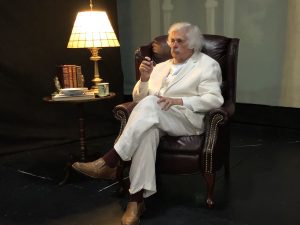 On October 27-28th, I did 3 performances of Mark Twain Speaks at the Sweet Bee Theater in Pittsboro, North Carolina.  In one respect, this was a new experience for me.  I had never given more than one speech in one afternoon.  The good news is that my voice was still strong after giving two performances and I really believe I could have given a third speech if called upon!  The audiences at these performances could not have been more enthusiastic and supportive.  I learned later, that there were several hard core “Twainiacs” in the audience.  Two of them shared with me that they had seen Hal Holbrook do his version of Mark Twain years ago and were delighted that I was keeping Twain’s storytelling alive! The Pittsboro speeches were the first time I had the opportunity to share Mark Twain’s stories about slavery.  He fought against bigotry and slavery during his time- both as a writer and as a speaker.  Mark Twain was uniquely qualified to discuss racism, having grown up during the slavery era and living to see Emancipation and its aftermath.  He was fearless in taking a stand and always advocated for equal treatment for all Americans.  Of course, Mark Twain was our greatest humorist and his stories are still funny even for the today’s audience.  My wife Carolyn attended 2 of the 3 Pittsboro speeches and was happy to hear her favorite story about the time Twain claims he sold a dog that didn’t belong to him.  Truth be told, it’s my favorite story also. Mark Twain always told stories that had the theme of morality.  As he famously said, “I would rather teach morals, than have them myself.”  Who among us can argue with that? It was great working with Craig Witter and Tammy at the Sweet Bee Theater and I very much appreciate their invitation to speak.